Happy holidays from everyone here at Rare Books and Special Collections! As an early Christmas gift, we offer the final student dictionary report from the course English 320: History of the English Language. As I mentioned in last week’s post, the exhibition, The Road to the OED, has been extended until the end of January, so please feel free to stop by to see it when we open on January 2 after the winter break. Hope to see you then! 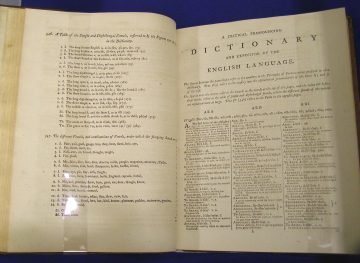 A Critical Pronouncing Dictionary and Expositor of the English Language

Written by elocutionist / lexicographer John Walker and released in 1791, A Critical Pronouncing Dictionary and Expositor became renowned as the ‘statute book of English ortheopy’ that ‘settled all doubts’ on issues of English pronunciation (Beal). Born in 1732, Walker was an actor who performed in Bristol, Dublin and London with various acting companies. He married a fellow actress, Sybilla Minors, and after his marriage he converted to Catholicism. After 1768 he retired from acting and became a successful teacher of elocution. He became a popular lecturer frequently invited to give private lectures at various Universities including Oxford and Dublin. He wrote many books on elocution but it is his dictionary for which he is most famous. Walker continued to publish books on the English language until his death in 1807. 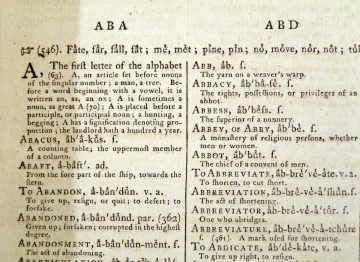 A Critical Pronouncing Dictionary and Expositor of the English Language

To situate this work within the history of English lexicography, Walker’s preface gives credit to predecessor dictionaries of Johnson (1747), Kenrick (1773), and Sheridan (1780) among others. According to Walker, each dictionary is “greatly superior to every other that preceded it” (Walker, iii). However, he is critical of the all the various inconsistencies in these dictionaries. Therefore the purpose of Walker’s dictionary was to provide an authoritative and elaborative work that addresses these inconsistencies. On the spectrum of linguistic prescriptivism and descriptivism, Walker is unabashedly prescriptive. He points out that Sheridan is Irish, and that his dictionary pronunciations lean towards an Irish accent which is incorrect in Walker’s view. His “Principles of the English Language” and various guides for “Just Pronunciation” effectively demonstrate his inclinations towards linguistic prescriptivism.