Papal Parchments and Blackletter Books: How the Middle Ages Shaped the Way We Read, 1245 AD to UBC 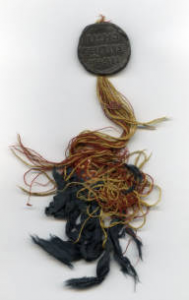 This fascinating exhibition tells the medieval and early modern story of the written word using RBSC’s fantastic collection. Two recent acquisitions are of particular note: a papal “bull,” or legal decree, issued by Pope Innocent IV in 1245 (whose seal is depicted at the right); and a textbook used at the University of Paris during the late thirteenth century. But the exhibition also showcases pieces that have been here for decades, such as a single leaf from the Catholicon, a Latin dictionary probably printed in 1460 by Johannes Gutenberg, the inventor of typography. We also have a 1331 legal document donated to the library by the Bulwer family, whose ancestors are named in the manuscript and who moved from England to Vancouver in 1887.

The items found in this exhibition also explore the intersection between manuscripts and early books called incunabula (English “incunables”), texts printed during the period 1450-1500: the Biblia Pauperum (“Bible for the Poor”) is a printed book bound in the remnants of a medieval manuscript; and our copy of the Roman emperor Justinian’s Institutes has many annotations added by hand and even has fragments of an old manuscript book in its binding!

These pieces were produced over a period of nearly three hundred years, from 1245 to 1525, and together they tell the story of the written word as it moved towards the forms we use today. But we are part of the story too, moving that history forward as we write in English, French, or any of the other European languages.

You can explore the objects featured in the exhibition through the gallery below, but there is nothing quite like experiencing these treasures in person. The exhibition, which is free and open to the public, runs from May 1-31, Monday through Friday, 10 a.m. to 4 p.m. at Rare Books and Special Collections on the first floor of the Irving K. Barber Learning Centre. For more information, please contact Rare Books and Special Collections at 604 822-2521 or rare.books@ubc.ca. 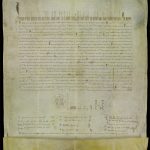 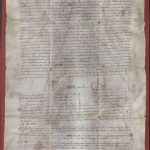 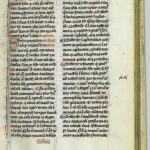 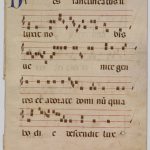 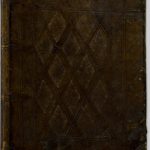