Many thanks to guest blogger Claire Williams for contributing the below post! Claire is a graduate student at UBC’s School of Library, Archival and Information Studies and has worked on processing labour history-related archival materials at RBSC.

As another September rolls around, and we take the first Monday off to celebrate Labour Day, we wanted to highlight some of the primary sources we have at RBSC that document the struggles won by the labour movement.

A Brief History of Labour Day

Labour Day in Canada has its origins in a struggle that originated over a century ago. In the late 1800’s, industrial workers in North America demanded humane working conditions, including a nine-hour workday. The Toronto Typographical Union went on strike in support of these demands, and many of the leaders of the strike were subsequently arrested. Following a public outcry, including large protests of the unfair treatment of the workers, parliament passed the Trade Unions Act, legalizing union activity and the legal right to strike. The legacy of this struggle led to the declaration of Labour Day as a national holiday. So began a tradition of recognizing the power of individuals who were willing to fight for the rights of the working class. While these struggles resulted in major legal and policy changes, they also came at a high cost to some workers who faced legal punitive action, loss of employment, arrest, and on occasion, physical violence.

Exploring Records of the Labour Movement

Here at Rare Books and Special Collections, we hold a wealth of primary sources related to labour history. I work at RBSC as a student archivist, where it is my job to arrange and describe these records in order to provide for their long-term preservation and access. One of the fonds I worked on was the Jean Sheils Research Collection. Sheils’ father, Arthur “Slim” Evans, had been a leading member of the On-to-Ottawa trek in 1935. During the trek over 1,000 unemployed men rode the trains from Vancouver to Ottawa in order to appear before the federal government and request better working conditions in the labour relief camps. The trek ended in Regina on 1 July 1935 when a riot broke out between the trekkers, their supporters, and the RCMP and local police. 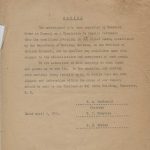 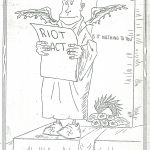 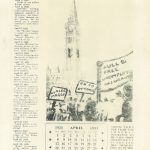 Box 08-21 [News articles and Workers Calendar] (File contains news-clippings and newspaper articles related to Trek and strike, as well as a copy of Workers’ Calendar dated 1934) 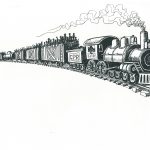 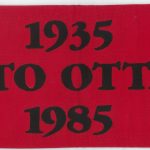 For a guide to more labour related material at RBSC, see our research guide on the topic, located at http://guides.library.ubc.ca/labourhistoryarchives. To view this and other material in person, please come down to the RBSC reading room located in the basement of the Irving K. Barber Learning Centre.

Posted in Collections, News, Research and learning | Tagged with