An Ocean of Knowledge, a Sea of Books

Many thanks to guest blogger Alvionne Gardner-Harrison for contributing the below post! Alvionne is a graduate student at UBC’s iSchool (School of Library, Archival and Information Studies) and is currently working with UBC Library’s W.C. Gibson History of Science and Medicine Collection as a professional experience project.

An Ocean of Knowledge, a Sea of Books: The Ocean and its Inhabitants in the W.C. Gibson History of Science and Medicine Collection

For Science Literacy Week 2019, one of the exhibits shared by Rare Books and Special Collections focused on materials from the W.C. Gibson History of Science and Medicine collection. With exhibit items ranging from sea otters on book-bindings to hand-painted seaweed fronds, and from the earliest studies in microscopy to guides for hobbyist naturalists, “An Ocean of Knowledge, a Sea of Books” gives some historical background to the ocean science highlighted in this year’s Science Literacy Week theme.

The exhibit of European scientific literature and illustration from the 17th-19th century explores representations of oceanic life and the techniques and technologies that were used to gather, organize, and distribute information about oceanic organisms. For much of the history of science that the W.C. Gibson collection documents, manuscripts and printed books were the main format in which new scientific observations and ideas were disseminated. The physical qualities of organisms such as fish, molluscs, and sea mammals that were encountered on colonial scientific expeditions, could best be preserved through detailed illustrations that were then reproduced in copperplate and sometimes coloured by hand. These striking images, organized according to new taxonomic systems like that of Linnaeus, were distributed in books such as those in this exhibit. The books included in the exhibit’s cases, some of which are featured below, highlight both ocean science and scientific literacy prior to the 20th century.

Significant advances in technology, both intellectual and material, were required for European scientists to systematically study oceanic organisms, as was the expansion of colonial voyages. Antonie van Leeuwenhoek and Robert Hooke contributed to the nascent biological sciences through their development of microscopes and their demonstration of how they could be used to study microscopic organisms and the structures within larger organisms. 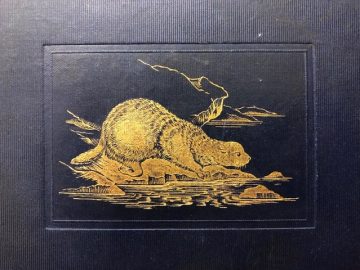 Taxonomic systems enabled naturalists to organise newly discovered (and previously known) life forms into meaningful categories and to better understand them. Encountering unfamiliar varieties of oceanic animals and plants required journeying abroad. This usually took place in the context of voyages on merchant ships; “discovery” was funded and enabled by the processes of capitalism and colonialism.

The physical descriptions of organisms that were encountered on both local and colonial scientific expeditions could be communicated most effectively through detailed illustrations. These images were then reproduced as prints which were made from copperplate engravings, and which could be easily shared throughout the scientific community. In the 19th century, these illustrations were also widely printed in less expensive—but often beautifully bound—books for the general public, who enthusiastically engaged in early popular science. 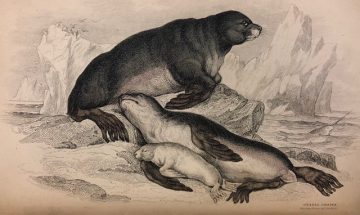 Mechanized reproduction of images reduced costs, but some book buyers still chose to have illustrations hand-painted with striking colour on top of the printed images, such as the unusually large seaweed pictured in The botany of the Antarctic voyage of H. M. discovery ships Erebus and Terror.

This case featured examples of illustrations depicting fishes identified and illustrated during global voyages of exploration and organized according to the binomial nomenclature of Linnaeus.

From “Sea Monsters” to Seals

In addition to an extensive selection of books on fishes, the Gibson collection includes scientific materials on aquatic plants, molluscs, seabirds, and sea mammals, among other groups of organisms recognized during the 19th century.

Of particular note are books containing illustrations of cetaceans, a group which includes whales, and of various types of seals. These sea mammals were not only of interest from a scientific perspective; increasing awareness of their physical properties and habits improved the effectiveness and efficiency of organized hunting. The object of this was to convert these animals’ bodies into fuel and luxury goods, an effort that was often too successful to be sustainable in the long term. Some sea mammal populations remain subject to conservation efforts today as a result of this hunting.