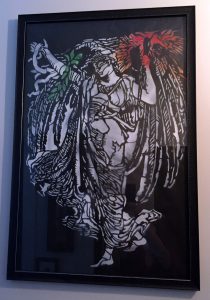 In 2013 my apartment building in Mount Pleasant was sold and the fate of the occupants was in peril. The building was full of long-term tenants enjoying relatively inexpensive rent and now it seemed certain that we would be evicted, our apartments renovated, and the rents tripled. One evening, my partner and I noticed the appearance of a sandwich board in front of the building that seemed to be advertising a shop or service of some kind. For a few hours in the evening, it would show up, then disappear, only to reappear the following evening. This continued for a week or two. It contained no words, only the image of an oddly familiar angel with an outstretched arm gesturing toward our building. I tried to understand what it was advertising. After obsessing over where I had seen that winged creature before, I recalled a class I had taken during my undergrad and after a bit on time on the internet I realized that this image was a reference to a woodcut by Walter Crane called “To the memory of the Paris Commune” (1871), which memorializes the death of thousands of Communards killed by the French army. The sandwich board seemed to signal a dim future for the tenants occupying our, and so many other, rental buildings across Vancouver. Then as quickly as it appeared, it vanished, and I never saw it on the sidewalk in front of the building again.

A maquette of the work made a reappearance some time later at an impromptu art sale held in the building’s lobby. While I was sad about what was happening to the tenants of my building, and obviously, our destiny was nothing compared to what the actual Communards received in 1871, I was excited to see a maquette of the sandwich board for sale and to learn who had created it. I bought the work, and this may have been the artist’s first sale, as he seemed both embarrassed and uncomfortable with the transaction. When asked, he was unable to tell me the price. After a few uneasy seconds, I made an offer which caused him to shift in his seat, but he accepted. The image is by Colin Fraser, spray paint on paper [81 x 51 cm]. It is from a time when I knew the names of all my neighbours. The sandwich board’s nightly position on the sidewalk did nothing to undermine our certain eviction, but nevertheless represented resistance, and one tenant’s silent nightly protest.

My parents were refugees of the Hungarian Revolution, and struggled in different ways to adjust to life in Canada. They left for different reasons; my dad because he took part in the resistance, and to stay would have meant severe repercussions and possible death. My mom left when her best friend suggested they join the stream of people heading for the Austrian border. Toiling in the soviet factory system together did not seem palatable when there was a glimmer of hope in escaping to the promise of a better life. My parents met on Vancouver Island, part of a small community of Hungarian refugees adapting to the culture in Canada, learning English, and establishing new roots. We did not have much growing up, and out of both preference and necessity, we raised or grew most of our own food. We even made soap out of pig fat! My dad worked in construction, and doing odd jobs, while my mom with only an education to age 14, mainly took cleaning jobs so she could buy the extra things we could not make ourselves. For much of my early childhood, she would leave five nights a week to an office building in downtown Victoria. This job meant an endless supply of craft and art supplies. She would bring home old file folders, expired diaries and ledgers, and other discarded detritus that was much prized for my many creative projects.

One item I still have from this period is a 1975 hardbound appointment book that had seen minimal use by its original owner. I filled the pages with my childhood scribbles and drawings, practiced my printing and pasted in and collaged images cut out from old magazines. What makes the book precious to me now is that it also contains a few sketches by my anya (“mom” in Hungarian), that I have a clear memory of asking her to do. My favourite is a pencil sketch of a cat hanging off a pole, based on the classic 1970s “Hang in there” imagery. And that is what she did, she hung in there and gave me the opportunity to have a life free of the challenges she faced. She died in 2019, but I am forever grateful for this reminder of her strength and endurance. 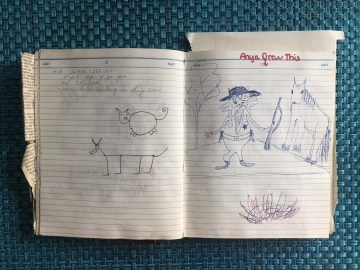 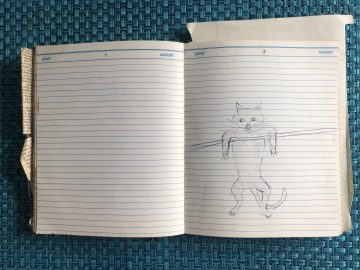 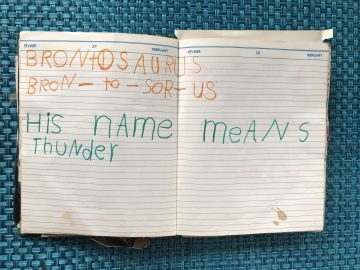 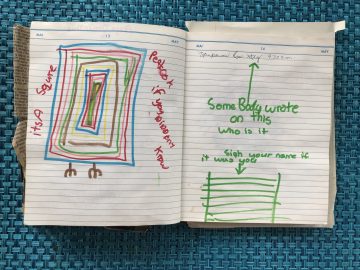