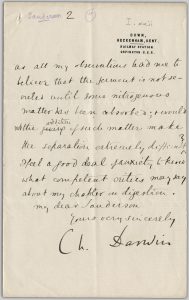 This collection, which was acquired by Woodward Library in 1966, consists of correspondence between Darwin and physiologist Sir John Scott Burdon-Sanderson from the years 1873-1881. After his medical education at the University of Edinburgh and at the University of Paris, Burdon-Sanderson became a Medical Officer of Health for Paddington in 1856 and subsequently a physician to the Middlesex Hospital and the Brompton Consumption hospitals. Between 1858-1866, he investigated diphtheria, cattle plague, and cholera when they appeared in England. He was one of the forerunners of penicillin, observing its ability to inhibit the growth of bacteria before Alexander Fleming. Burdon-Sanderson was also the first person chosen to be the Waynflete Chair of Physiology in Oxford in 1882. In 1895, he became Regius Professor of Medicine at Oxford, a post he held until his resignation in 1904.

The letters in this collection deal with the research Darwin and Burdon Sanderson did on the digestive powers and leaf movements of insect-eating plants, notably Drosera and Dionaea. Darwin published the results of this research as part of his Insectivorous Plants (1875).

This collection is made up of family records of the Darwin Fox family, most notably correspondence between William Darwin Fox and his second cousin Charles Darwin. The Reverend William Darwin Fox graduated from Cambridge in 1829 and was appointed vicar of Delamere, Cheshire in 1838, where he remained until his retirement in 1873. Darwin Fox shared his cousin’s passionate interest in natural history. In addition to being a naturalist, he was also an entomologist, with a particular interest in collecting beetles. He is credited as the person who introduced Darwin to entomology and tutoring him in natural history. Fox and Darwin had quite a close relationship, maintaining regular contact through letters. The collection was purchased by Woodward Library in 1970 from Captain Christopher Pearce, a descendant of the Fox family and resident of Vancouver Island.

Both of these collections have been digitized and are available in UBC Library’s Open Collections for your perusal and ejoyment.