And They Called It Vancouver

Many thanks to guest blogger Ashlynn Prasad for contributing the below post! Ashlynn is a graduate of the UBC School of Information and the curator of the new online exhibition of photographs from the Uno Langmann Family Collection of B.C. Photographs, And They Called It Vancouver: Settler-Colonial Relationships to Indigenous Lands and Peoples. Ashlynn’s work on the exhibition was done as part of her 2020-21 Young Canada Works (YCW) post-graduate internship with RBSC. She is currently the Librarian & Archivist at the Vancouver Maritime Museum.

I first began curating this exhibition, And They Called It Vancouver: Settler-Colonial Relationships to Indigenous Lands and Peoples, in the autumn of 2020, almost exactly three years after my first exhibition of photographs from the Uno Langmann Family Collection of B.C. Photographs. At that time, I was struck by how many items in the collection contained scenes of British Columbia that were familiar to me, even though most of them had been taken nearly a century before I was born, and my curatorial concept for that first exhibition, centered on the unchanging nature of architecture, gathering spaces, and natural landscapes across time.

When I dove back into the Uno Langmann collection this time, something quite different stood out to me. Although most of the images in the collection were taken approximately one hundred years ago, a mere blink of an eye on a historical scale, it seemed to me that many of the photographs were relics of their time, in the sense that they showcased scenes and themes with apparent pride that we today might see with a more critical eye.

An important note about the photographs in this exhibition is that, for the most part, we cannot be certain of the photographers’ intentions. Within the text of the exhibition, I take the liberty of hypothesizing about the purpose of the photographs – why someone at that time would have wanted to document wide swaths of forest that have been logged, or animals that have been killed for sport, or parades marching through downtown Vancouver. Without being certain of the reasons why these photographs may have been captured, these hypotheses are simply meant to express my own interpretation of the photographs, as I parsed through each and every one at the beginning of my curatorial process. I couldn’t help but witness the images through a lens that more critically examines the issues that so many of us care about today: the environment, the fact that we live on stolen lands, what it means to live in a post-industrial world. 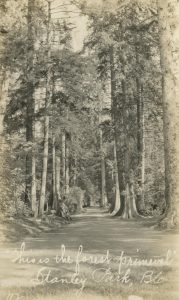 The closer I looked at the collection, the more I seemed to find images that fell into one of those three categories. The knowledge of how these lands were stolen and the peoples indigenous to these lands brutally oppressed became the backdrop to how I viewed the entire collection and the exhibition. Images of trees being cut down and smokestacks being raised were not celebrations of burgeoning industry in a young province; they were examples of the destruction of the natural environment. Images of new buildings downtown and the creation of Stanley Park were not examples of progress towards modernization; they were examples of settlers confidently making grand plans for lands that did not and do not belong to them. Some of the images, no matter what their original purpose may have been, became visual evidence of a flagrant disrespect and disregard for Indigenous peoples.

One of the strengths of historical photographs – and indeed, history in general – is that it can cause us to think more critically about our role in it. How have our pasts shaped us? How will we shape the future? I hope this exhibition encourages us, particularly those of us living on stolen lands, to think more critically about our own roles in the narratives presented here: our relationships to the environment, our relationships to urban development, and our relationships to and with Indigenous peoples. I hope we can more clearly see what’s there, as well as what may be missing.