In honour of International Kelmscott Press Day on June 26, 2021, we’re celebrating and reflecting on the acquisition of the UBC Library’s own Kelmscott Chaucer.

The poet William Butler Yeats described it as the “most beautiful of all printed books.” Artist and illustrator Edward Burne-Jones likened it to a “pocket cathedral.” At UBC Library’s Rare Books and Special Collections, we know it as the single most requested book in our collection.

William Morris’s printed masterpiece, the complete works of Geoffrey Chaucer published by Morris’s Kelmscott Press, known as the Kelmscott Chaucer, is a book of renown on par with the likes of Shakespeare’s folios. It is part of the “triple crown” of fine press printing referred to by book historians and collectors, made up of three remarkable works held to represent the pinnacle of the book arts of the modern fine press movement. Issued in a limited edition of only 438 copies in 1896, the Kelmscott Chaucer is tracked and studied to such a degree that there is a scholarly census of each copy’s history and current custodian, which is kept up-to-date on the author’s website. 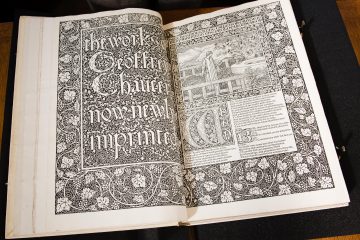 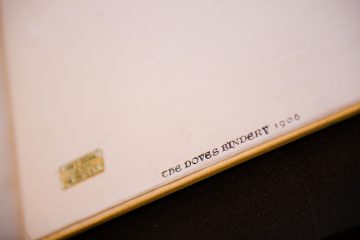 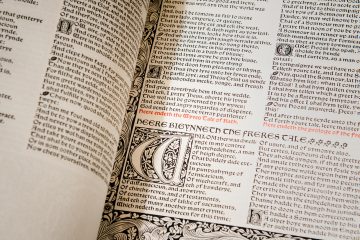 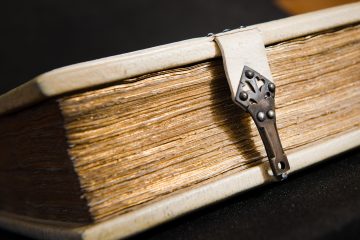 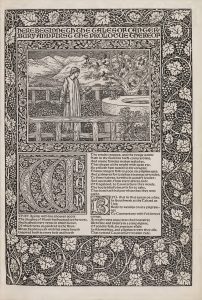 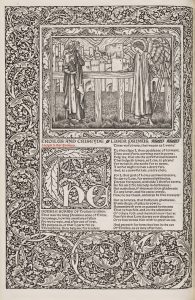 A joint acquisition by UBC Library and the faculty of arts, the Kelmscott Chaucer was purchased in the summer of 2016 after two years of fundraising efforts, which included a substantial donation from the B.H. Breslauer Foundation of New York. UBC faculty, community members and UBC’s Centennial Initiatives Fund also contributed. The drive to acquire the book was based not only on its significance to book history and fine press printing generally, but to honour and celebrate the 50th anniversary of the donation to UBC Library of the world-renowned Colbeck Collection of 19th-century literature, which includes several extremely rare Kelmscott Press books. RBSC’s copy of the Kelmscott Chaucer, known as the “Slater-Gribbel-Schimmel” copy, boasts not only the Morris-designed white pigskin binding, executed by the Doves Bindery (one of only 48 copies in the world with this particular binding), but also a rare printer’s proof with variant typesetting for the opening page.

While we at RBSC were beyond thrilled with the acquisition after many years of effort, we had no idea that the public response to the Kelmscott Chaucer would be so enthusiastic! We were amazed that the Vancouver Sun chose to feature the acquisition on the front page, and promptly ran across campus trying to buy commemorative copies of the paper in our excitement. And as soon as the word got out, visitors started arriving to experience the book in person. People from all over British Columbia and beyond made the trek out to UBC’s somewhat isolated campus, individually and occasionally in groups organized especially for the occasion, to feel the Batchelor handmade paper, hear the satisfying “swish” of the pages as they turn, to marvel at the intricacy and detail of Burne-Jones’s illustrations and Morris’s decorations, to admire the stunning binding, and to enjoy the feeling of connection to history. In the first three years after our Kelmscott Chaucer came to RBSC, it was circulated to visitors in our reading room and classes an average of twice a week and outstripped our Second Folio of Shakespeare and our 15th century book of hours in popularity.

But since one can’t expect every fan of William Morris or arts and crafts printing to make the trip to UBC, our colleagues at UBC’s Digitization Centre scanned the entire work in 2018, making it freely and publically accessible through the Library’s Open Collections, where it has been viewed nearly 3000 times. The Library Communications team was even inspired to create a downloadable colouring book featuring pages from the Kelmscott Chaucer, helping to share the beauty of the book more widely.

We feel so lucky to be able to not only act as stewards and custodians for this exemplar of book design and printing history, but to ensure that it is accessible to the UBC community, the people of British Columbia, and lovers of beauty the world over, to be experienced, celebrated, and enjoyed. Happy International Kelmscott Press Day!

Posted in Announcements, Collections, Exhibitions, Research and learning | Tagged with