As we acknowledge the 80th anniversary of the forced dispersal, internment, and dispossession of Japanese Canadians from the coastal regions of British Columbia, we’re pleased to be able to share an online exhibition curated by Mya Ballin and Sasha Gaylie, both graduate students at UBC’s School of Information.

Many thanks to Mya for sharing her thoughts about the process of curating the exhibition. Mya and Sasha’s work on I Know We’ll Meet Again: Correspondence and the forced dispersal of Japanese Canadians was done as part of a summer 2021 professional experience project with RBSC and the Asian Library at UBC. 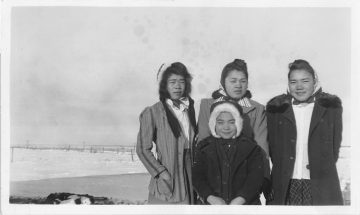 This project was a labour of much care over a very brief period of time. Completed in two months, my project partner, Sasha, and I found ourselves very quickly immersed in the written selves that are contained within the letters in the Joan Gillis fonds, deeply emotionally drawn to the details that the writers felt were safe to share with Joan. When reading the letters, it’s hard not to feel like these are your old school friends, too.

We wanted to create an exhibit that not only helped to contextualize the letters and the period in which they were being written, but also to allow the letter writers’ voices to stand on their own so that folks visiting the exhibit might have a similarly emotional encounter with these young individuals through their words alone.

To this end, the exhibit has two parts:

The first part of the exhibit is a more traditional curation of the letters. We offer you the opportunity to view the collection through our eyes, providing interpretation and information that focuses on some of the key themes that emerged from our reading and experience of the letters.

The second part of the exhibit is an opportunity to explore the transcripts of some of the letters. While we have offered the ability for a guided tour through them using a subject visualization tool, it is also possible to view each transcript one by one without our analysis appearing on the screen.

We hope that presenting the materials in this manner offers different ways of engaging with the material and different opportunities to ‘meet’ its authors.

I Know We’ll Meet Again: Correspondence and the forced dispersal of Japanese Canadians, focuses on a selection of letters from the Joan Gillis fonds written by young Japanese Canadians who were among the approximately 22,000 Japanese Canadians from British Columbia who were forcibly dispersed from their homes as a result of the Canadian Federal Government’s Orders in Council. The exhibition details their deep homesickness and sense of isolation from their friends and communities, the new living and labour conditions they had to endure, their continued sense of Canadian identity even as the government labeled them “alien,” the bright spots they were able to find in their present conditions, and their imaginations for the future.