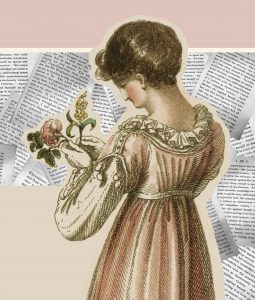 In coordination with our current exhibition Ever Austen: Literary Timelessness in the Regency Period, Rare Books and Special Collections is delighted to host a special Austen-themed panel discussion.

We’re delighted to be joined by scholars from both UBC and SFU for this fascinating discussion on and celebration of Jane Austen, in honour of the 200th anniversary of her death.

Although today regarded as one of the world’s great novelists, Austen’s success in print did not come during her lifetime. She had trouble finding publishers for her work; several of her works sold poorly; she earned little from them; and received only one major review. Our talk will explore this surprising publishing and printing history, offering insight into the challenges Austen faced in the difficult print marketplace of early nineteenth-century Britain.

It is tempting to see, in Northanger Abbey, a rejection of the values and conventions that we associate with gothic fiction, but Austen’s investment in gothic fiction is considerably more complex than simply as something to poke fun at. The novels of Ann Radcliffe in particular are among the most important precursors to Austen’s literary triumphs.

Jane Austen’s novels are widely read as Important Literature in university curricula, but she was a non-elite, popular writer in her own day, and her place in popular culture has expanded wildly in recent decades. This talk will engage current theories of popular culture to consider Austen’s work in the Regency and in recent popular culture, including film and television versions and novel adaptations that re-tell her stories for new audiences.

The panel will be moderated by UBC’s Professor Emeritus of English Herbert Rosengarten.

The event is free and open to the public. We hope you can join us! For more information, please contact Rare Books and Special Collections at 604 822-2521 or rare.books@ubc.ca.