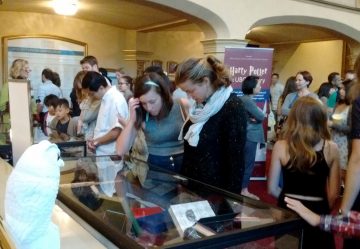 Rare Books and Special Collections was delighted to be invited by the Vancouver Symphony Orchestra (for the third time!) to create a display of Harry Potter books for the latest performance in their Harry Potter Film Concert Series. Taking place at the beautiful Orpheum Theatre in downtown Vancouver, these unique events feature screenings of the Harry Potter films while the VSO performs the entire score live. The most recent events in the series ran July 13-July 15, and RBSC provided four display cases highlighting some of our unique and remarkable Harry Potter books, as well as “magical” antiquarian books, from our collection. We were also delighted and proud to honour the role of Allan MacDougall, founder of Raincoast Books, for his significant role in bringing Harry Potter, and author J. K. Rowling, to Canada, by displaying memorabilia kindly loaned by the MacDougall family. Now that the performances at the Orpheum are over, the cases are back in the RBSC reading room, and will be available through the rest of the summer. 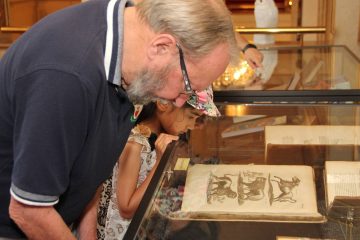 Rare Books and Special Collection has had strengths in classic and canonical children’s literature since the mid-1960s when the exceptional Alice One Hundred Collection was donated to the Library by UBC’s graduating class of 1925. The class donated the collection in celebration of their 40th anniversary and the 100th anniversary of the original publication of Alice’s Adventures in Wonderland. The original donation, comprised of nearly 500 items dating between 1858 and 1965, was rich in first, early, and limited editions of books by and about Lewis Carroll, and featured the work of more than 80 illustrators. The children’s literature collection at RBSC continued to grow with the donation in 1976 of the Arkley Collection of Early and Historical Children’s Literature by Stan T. Arkley, a native of Vancouver and also a member of UBC’s class of 1925, and his wife, Rose. Today, through purchase and donation, the Arkley Collection comprises more than 12,000 Canadian, British, and American children’s books, serials, and manuscripts. The Arkley Collection has always prioritized popular works or “books that children actually read,” so it seems incredible that as late as spring 2015, Rare Book and Special Collections did not have a single Harry Potter book in its collection. 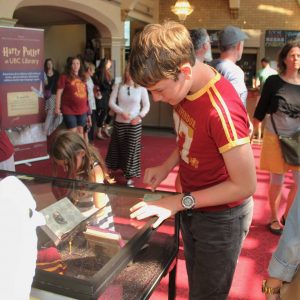 As the most popular children’s literature series in several generations, with a global impact equaling Alice’s Adventures in Wonderland, Harry Potter has a natural home in RBSC’s collection. Consequently, in the summer of 2015, RBSC began the process of acquiring complete sets of the U.S., U.K., and Canadian first editions of the Potter series. As books were added to the collection, RBSC learned more and more about the profound and surprising connections that Vancouver shares with the Harry Potter series (for example, Raincoast Books in Vancouver published the Canadian editions of the Harry Potter series until 2010, while Kidsbooks in Vancouver was the first bookstore in all of Canada to carry Harry Potter and the Philosopher’s Stone and hosted four legendary book release parties). Collecting the Harry Potter books not only ensures that scarce first or special editions of these works can be properly cared for and made accessible to Canadians for generations to come, but allows RBSC to promote the story, not only of one of the most important series in children literary history, but also the story of the impact that the series had on the people, the business, and the cultural landscape of Vancouver.