Past Purrrrfect: Cats in the Collection

In the Doghouse: Historic Hounds)

“Time spent with a cat is never wasted” – Colette

Have you heard the mews?! Libraries and archives have always been home to our feline friends, and Rare Books and Special Collections at the UBC Library is no exception. We don’t have a resident kitty patrolling our reference room, vault or stacks, but we do have numerous cats “living” in our collections. Proving our predecessors were just as obsessed with collecting cat related archival and rare published materials as we are, Past Purrrfect highlights materials from the 19th to the mid-20th centuries featuring a bevy of furry felines. In this exhibit you will find kitties playing, sleeping, prancing, purring, and being naughty. From our diverse holdings, items on exhibit range from photographs and family albums, children’s literature, correspondence from noteworthy individuals, pop-up books, bookplates, and artist editions. 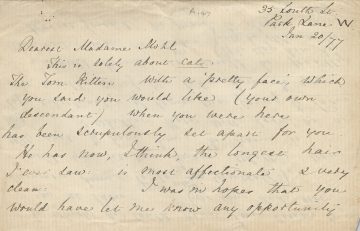 Our archival records are broad in scope, and include correspondence from well-known historical figures, as well as celebrated authors. RBSC hold 89 letters written by Florence Nightingale, the founder of modern nursing, with many focused on cats. She writes about her own pet Mr. Muff, and about finding homes for them among her correspondents. Writing to her friend Mary Mohl on January 20th, 1877, Nightingale writes:

Dearest Madame Mohl This is solely about cats: The Tom kitten with a ‘pretty face’, which you said you would like (your own descendant) when you were here has been scrupulously set apart for you. He has now, I think, the longest hair I ever saw: is most affectionate & very clean: I was in hopes that you would have let me know any opportunity by which he could have been sent to you at Paris: (as you did not summon him to go by with yourself). Could you let me know whether you still wish to have him: his name is Biz: & whether there will soon be a safe opportunity of someone going to Paris who would carefully take him to you: I should think he would be greatly admired even in Paris: {If he stops here, he {will be stolen or lost: dearest friend, no more to-day: ever your old Flo.

Other letters referencing cats are written by Malcolm Lowry, Ethel Wison, and Charles Darwin. Lowry, best known for his novel Under the Volcano, elaborated in a postscript in a June 20, 1950 letter to fellow author Christopher Isherwood, about issues with some troublesome felines:

P.S. I begun to write this letter originally, returning the complement (which I appreciate) in my own handwriting, such as it is — though I have no pen that works — taking advantage of this to write outside. But a cat spilt coconut oil on it. Then another cat spilt beer on it. Finally it blew into the sea, Retrieved thence it came somewhat to pieces and was, besides, a bit illegible. So I gave in, temporarily, to the machine age.

Originals of the above correspondence, along with letters by Darwin and Wilson on a feline theme, are on display as part of the Past Purrrfect exhibit.

Also in the exhibit, are photographs of cats selected from the Uno Langmann Collection of BC photographs, Wallace and Madeleine Chung Collection, Icelandic Archives of British Columbia, and other photographic holdings. These images show that from the early days of photography cats have been worthy subjects to record for posterity, either captured on their own, or with their human companions. These images also demonstrate that cats are integral and loved members of the families who give them shelter, whether that is a comfortable home or somewhere less traditional. 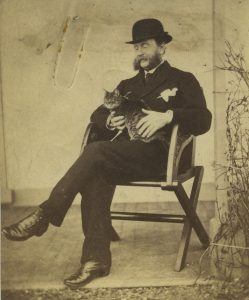 Governor Frederick Seymour, Vancouver Island, c186-?. BC-1024/1. From 1864 to 1866, Seymour served as the second Governor of the Colony of British Columbia, and then as first governor of the united colonies of Vancouver Island and British Columbia from1866 to 1869. This photo, taken with what we assume is his cat, is from his period in public office. 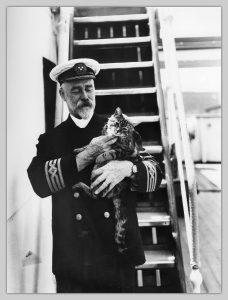 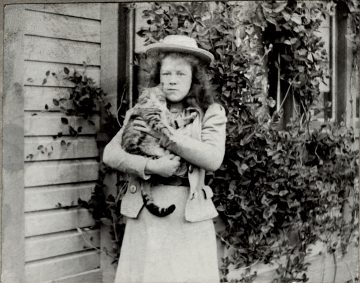 [Portrait of a girl with cat], c. 1890s. UL_1603_0063. This charming image is from an album documenting an unknown family living in British Columbia in the 1890s. We don’t know exactly where in Vancouver this image was taken, nor the name of the girl (or the cat), but the affection between the two is obvious.

Past Purrrfect contains volumes from our book collections, including examples from our vast children’s literature holdings and the Alice 100 collection celebrating 100 years since the original publication of Alice in Wonderland in 1865. The collection was donated to the UBC Library in 1965 by the graduating class of 1925 to mark their 40th anniversary, and contains numerous variations of the iconic Cheshire Cat among its illustrations. Also shown are classic stories such as Puss in Boots and the Tale of Tom Kitten, along with lost favourites that are deserving of renewed interest. One discovery in researching this exhibit is the Cats Tea Party. Listed in our catalogue without any attributions, research revealed that its illustrator is Harrison Weir. Weir was a prolific author and illustrator active in the late 19th Century known for his books about nature, and particularly for his drawings of cats. Weir is also referred to as the “Father of the Cat Fancy” and organized the first cat show at the Crystal Palace in London in 1871. 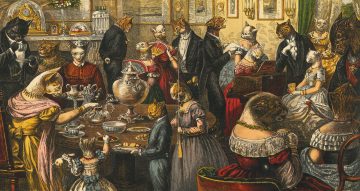 From the Cats Tea Party, illustrated by Harrison Weir. This book was published by George Routledge and Sons in England in 1871, the same year as Weir organized the first cat show. This show at the Crystal Palace led to cat fancy (the recognition and registration of pedigreed cats) as we know it today. Weir founded the first National Cat Club in England in 1887. 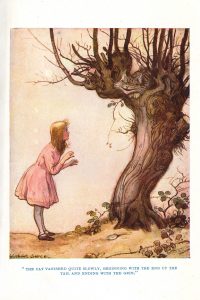 This volume of Alice in Wonderland, published in 1948 in London contains illustrations by George Soper (1870 – 1942). Soper was an illustrator and etcher, contributing his talents to children’s literature at the turn of the 20th Century. In addition, his work depicted country and rural life. 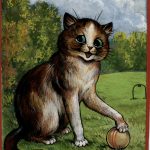 The Tremaine Arkley Croquet Collection consists of over 2,400 items depicting the game of croquet (and earlier pastimes of its type) from the 18th century to the present. Within the collection are numerous examples of animals enjoying this most Victorian of pursuits, particularly cats whose cunning sportsmanship is exceptionally suited to the game. Included in the exhibit are drawings by Louis Wane (1860-1939) one of the better-known illustrators of children’s fiction featuring cats. Wane produced numerous books and hundreds of illustrations starring large-eyed anthropomorphic cats and kittens.   Other items on display show less refined creatures (dogs) disrupting play and causing havoc.

In the Doghouse: Historic Hounds 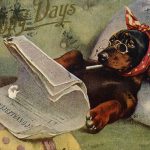 Running concurrently with Past Purrrfect, we have devoted space for those who may be more partial to dogs, as we don’t want lovers of canines to feel left out. In the Doghouse: Historic Hounds is curated by iSchool graduate student (and RBSC Archival Assistant) James Goldie. In James’ words:

Humans and dogs have evolved alongside each other for millennia, so why should cats get all the glory here at RBSC? Many dog-related phrases and idioms have negative connotations (“dogs days,” “dog-eat-dog world,” and “sick as a dog” to name just a few), however, this part of our exhibition seeks to reclaim the notion of being in the doghouse. Here you’ll find materials celebrating our tail-wagging, four-legged friends. Though today we live in an age of doggy daycare and paw-sized winter boots, affection for dogs (and the central role they’ve played in our lives and imaginations) has changed very little in the last 150 years. Purebreds and mongrels alike are featured throughout our collection, as evidenced by this sampling of photographs, books, correspondence, and more — a veritable dog’s breakfast of archival resources we hope will delight you as only these special animals can.

Scholarly Purr-suits: cats and dogs in the library

In addition to Past Purrrfect and In the Doghouse at Rare Books and Special Collections, please also enjoy the following feline and canine themed exhibits at other branches of the UBC Library:

Friends from another Species: the Business of Pets

The David Lam Library and Canaccord Learning Commons’ part in the exhibit will include highlighting aspects of the print and electronic collection, as well as search strategies that help people find information on pets and the pet related industries. This includes market research resources like Passport GMID and IBISworld, as well as resources on influencer marketing and social commerce. Engagement activities include a photo wall of a variety of pets that have captured the hearts of many through various social channels.

The Truth About Cats & Dogs: Children’s Books About the World’s Most Popular Pets

This exhibit will feature fiction and non-fiction children’s books about cats and dogs.  From well-loved classics like Old Yeller by Fred Gipson to newer graphic novels like Fluffy Strikes Back by Ashley Spires, library patrons and pet lovers of all ages will find something of interest.

It’s Reading Cats and Dogs will explore the literary, historical, and cultural obsession with our canine and feline companions through a selection of materials from Koerner Library’s holdings. The display will also highlight the cats and dogs of Koerner Library staff, with photos as well as book recommendations paw-sonally approved by our furry friends.

Wild Observations: Felidae and Canidae around the World

A selection of books highlighting the fossil history, genetics, and conservation of wild cats and dogs from Woodward Library’s collection.

All of our cats and dogs will delight and amuse you! 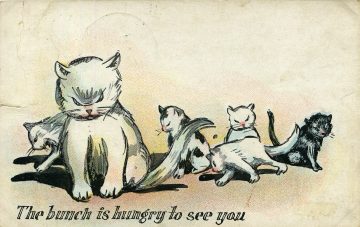 Additional thanks to exhibit supporter Catfe for providing a Nine Lives Card (9 visit admission card) for raffle. Enter at the front desk of Rare Books and Special Collections. The winner will be drawn at the end of the closing day of the exhibit, February 28th.

Both VOKRA and Catfe, among other animal rescue organizations in the lower mainland, provide a valuable community service in assisting with caring for, and finding forever homes for the many cats in their custody. If considering a pet there are many wonderful rescue animals waiting for homes.