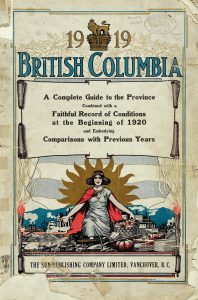 Many thanks to guest blogger Emily Homolka for contributing the below post! Emily completed her MLIS degree from UBC’s iSchool (School of Library, Archival and Information Studies) in May 2020. She is currently project archivist for the Nilekiwe Yesilawiwaci Sharing History project with the Shawnee Tribe Cultural Center.

I’m very pleased to introduce my digital exhibit, Ghost Towns in British Columbia, curated using some of the archival and historical holdings of Rare Books and Special Collections!

Ghost Towns in British Columbia explores some of the themes of emergence, daily life, and sudden (or eventual) disappearances of towns in British Columbia, looking briefly at the rise and decline of Anyox, Phoenix, and Sandon. Through those towns and through the holdings of RBSC, this exhibit looks at the broader phenomena of ghost towns, considering their connection to history, memory, and memory institutions, such as libraries, museums, and archives.

I first became interested in the idea of ghost towns in 2019, when I spent the summer working with a project called “Digitized Okanagan History” (since rebranded as British Columbia Regional Digitized History), which digitizes local archival and historical materials in Kelowna, a city in the Okanagan Valley of British Columbia. As I worked, I would often come across photographs of towns that, when I searched for them, would only show up in a Wikipedia page about ghost towns in British Columbia or briefly mentioned in a travel pamphlet. I became fascinated with the idea that I was seeing a glimpse of a place that no longer exists, and that I would not have known ever existed before I found traces of them buried in the archives. 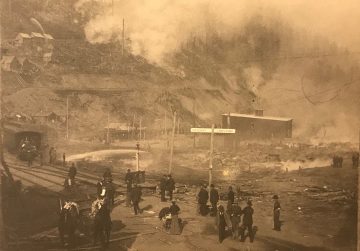 Sandon after the big fire

Ghost towns are by their very nature ephemeral, there and then gone, sometimes leaving behind scant amounts of information or the remains of building, sometimes getting repurposed (for good or for ill) decades after the end of the town, sometimes leaving behind nothing at all except memories and a romantic notion of what the town used to be. Exploring the collections at RBSC to see what information has been left behind and thinking about how that information shapes the modern day understanding of ghost towns has been an incredibly rewarding and fascinating experience. Through my exhibit, I hope I show what it is about ghost towns that has so captured my own imagination and to spark a similar interest in my readers!

I hope you enjoy the exhibition Ghost Towns in British Columbia!

This exhibit was possible due to the feedback and support that I received from Erik Kwakkel and Chelsea Shriver, as well as Rare Books and Special Collections at UBC Library that was so generous with my use of the archival materials. Thank you also to the Uno Langmann Family and to Wallace B. Chung and Madeline H. Chung, whose donations made this exhibit possible.