Many thanks to guest blogger Brandon Leung for contributing the below post! Brandon is a graduate student in the Film and Photography Preservation and Collections Management program at Ryerson University and has just completed an archival internship with Rare Books and Special Collections.

In the beginning of my internship at RBSC, I was able to first work on the Chung Collection, which I was interested in for its materials related to the experience of Chinese people in Canada. Unfortunately, due to the COVID-19 this project was put on hold as well as my internship. Fortunately, I have been able to continue my internship in the past few months with a new project involving the Uno Langmann Family Collection of BC Photographs, a primarily photographic collection. Given my background in photographic history, I was tasked in identifying the various photographic processes contained within the Langmann collection. Of course, because of the present circumstances, I had to rely on the photographs that have been digitized so far for my work, which is less than ideal (so many physical details can help you identify a photographic print!). Nevertheless, it still gave me the opportunity to look through a large amount of the different kinds of historical photographs held in the Langmann collection.

Flipping (virtually) through the myriad of photographs, I came across a series of postcards, one of many series of postcards in the collection, that were created by a specific photographer named George Alfred Barrowclough. According to Breaking News: The Postcard Images of George Alfred Barrowclough (2004) by Fred Thirkell and Bob Scullion, Barrowclough was born on May 1, 1872 in Birkenhead England. He immigrated to Canada with his family in the 1880s where they settled in Winnipeg. By the 1890s, he began working as a photographer and in 1904 opened his first photographic postcard business. In 1906 he moved in with his brother in Burnaby and even went down to San Francisco to photograph the ruined city after the recent earthquake. By 1909 he was living in Vancouver. The majority of his BC postcards were made from 1908 to 1912.

Barrowclough’s postcards piqued my interest for various reasons: one, I have become interested in historical “real photo postcards” (photographs printed onto photographic paper with postcard backings); two, most of the postcards in the Langmann collection are either created by photographic printing companies or unknown photographers (though other identified photographers come up such as Leonard Frank and Phillip Timms); and finally, many of Barrowclough’s postcards are different from what one might expect of postcard imagery. Many of his postcards do depict the usual touristic fare (city views, prominent buildings, Stanley Park), but, of interest to me, some of his photographs seem to have been taken surreptitiously or are subjects you would expect from a photojournalist. For example, a few of his postcards depict the aftermath of a streetcar crash into a drugstore and crowds viewing a Barnum and Bailey Circus parade in Vancouver (UL_1624_03_0040 and UL_1624_03_0043). 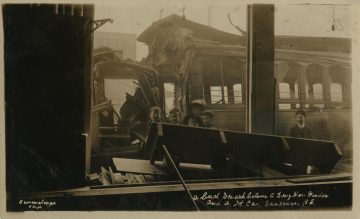 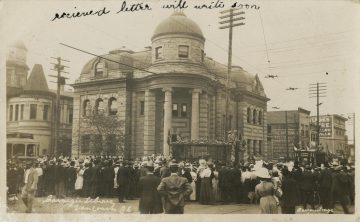 There was one of Barrowclough’s postcards that I came across which brought up some questions and associations for me. The postcard in question is titled Hindu Immigrants, Vancouver, B.C. (UL_1624_03_0052). In it, we see a group of turbanned South Asian men in front of a train station by the Vancouver waterfront (there is a ship in the background). Some of the men hold bags or packs. Others can be seen loading their belongings onto a nearby horse-drawn cart. We can tell the photograph was taken clandestinely; no one appears to notice Barrowclough. The photograph is composed at an angle, as if it were taken quickly and sneakily. Other observers seem to be present; besides Barrowclough himself (and now us looking at the postcard in the present), a blurry man can be seen to the far left in a suit and straw boater hat. 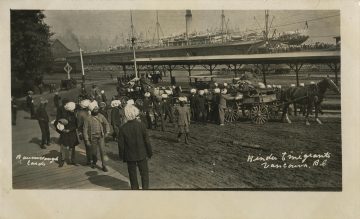 In particular, I was interested in why Barrowclough chose this subject matter—presumably immigration—for a postcard. Though photography’s artistic and cultural value can easily be seen today, as photographs are readily found in museums and archives, but throughout its history, photography straddled the fields of art, science and business. And certainly, Barrowclough made his photographs to sell. Why sell images of immigration? Why would people be interested in pictures of immigrants in the same way they would be interested in views of Granville Street?

Photographic history can give us an answer. Photography has been used to depict the “other” (oftentimes non-White individuals) throughout its history. Rising in tandem with 19th century European imperialism, photography was used to photograph colonized peoples as scientific specimens or entertaining spectacles for European audiences. As photography came soon after to what is now called North America, it was also used to extend the colonial gaze onto Indigenous and Native American populations.

In the early 20th century, when Barrowclough made his postcards, American photographer Lewis Hine took photographs of newly arrived immigrants in Ellis Island, New York to document the conditions there; German-American photographer Arnold Genthe took candid photographs of San Francisco’s Chinatown with an Orientalist and sentimental aesthetic. In Canada, Indigenous people would ask to be paid for European photographers’ use of their image, highlighting the power dynamics between photographer and subject. This relationship can also be seen in Barrowclough’s postcard. His subjects do not seem to be aware of being photographed, yet their image and status as “immigrants” were definitely being used and sold. Not many of Barrowclough’s other postcards depict the trade in images of Indigenous people, but the sentiment remains. White photographers and consumers of photographs and other visual imagery were interested in depictions of those different from themselves. 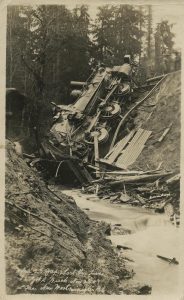 This colonial gaze is not just apparent from how Barrowclough photographed these men, but also from how he titled the postcard, Hindu immigrants. Likely the men are Sikhs because of the turbans they wear, called “Dastaar” in Sikhism. Sikh immigrants are well known for their early role in British Columbia’s economy, especially as workers in wood mills. Yet to European observers, anybody from India is a “Hindu.” All Chinese immigrants were “Chinamen.” In a more sensationalist postcard, Barrowclough photographed the aftermath of a train crash and freely used a slur in its title: Where 23 Japs [sic] lost their lives in G.N.R. wreck, Nov. 28, 09, near New Westminster, B.C. (UL_1624_03_0123) Language reveals the attitudes of the time and the fraught relationship between “settlers” and “immigrants.” Of course, these relationships were all happening on what was, and is, First Nations land.

The postcard also reminded me of another incident in Canadian history, also related to South Asian immigration. In 1914 the passengers of the ship the Komagata Maru, many of whom were Sikhs, tried to gain entry into Canada through Vancouver. They challenged two existing laws aimed at stopping immigration from India, one barring immigrants who did not travel on a “continuous journey” by ship and the other barred immigrants who had under two hundred dollars in savings. Both laws were instituted in 1908, overruled, but then reinstated by 1914. Photographs of the Komagata Maru, its passengers, government agents inspecting the ship and on-shore onlookers also exist, but this passing interest in these South Asian immigrants also did not benefit them. After about a month in Vancouver’s harbor, the Komagata Maru was forced to turn back. Some of its passengers were met with deadly force from British Officers upon their return to India.

Photographs are never just pictures, just as archives or collections are never neutral. Images are a construction of the time period they were created in. Even the most innocent-looking or everyday images can tell us more about their creators or remind us of how loaded with meaning and connotations they are. Coming across an image like Hindu Immigrants reminds us of the history of this unceded land and the people who have passed through it.