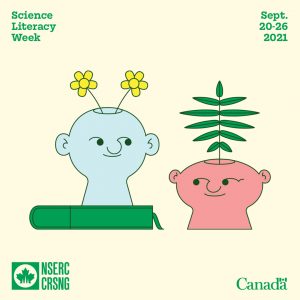 In honour of Science Literacy Week 2021’s theme of climate, our wonderful Forestry and Natural Resources Archivist, Claire Williams, has highlighted some of Rare Books and Special Collections’ many fonds related to British Columbia’s environment in the UBC Library Guide to Science Literacy Week.

These fonds include records documenting historical climate data, struggles for climate action, and the development of creative works to educate others on the importance of climate issues. You can read a general description of the fonds below, or can click through to the full inventories for more details.

Angus Elias was an Inuit trapper living on Banks Island in the Northwest Territories. The fonds consists of a photocopied diary recording personal experience, climatic and geographical conditions, and observations about nature written while Elias worked as a trapper on Banks Island, 1959-1966.

E.A. Royce was a subsistence farmer in the area of Browns Point, British Columbia.
The fonds consists of a diary of Royce’s activities at Christina Lake (1934-1943), including some financial accounts and weather reports for the winters of 1935/36 and 1936/37. The diary also lists the names of many families in the area.

The fonds contains records related to the activities of Douglas Mulhall in his capacity as member of Greenpeace Canada and as a member of the Greenpeace International, Stichting Greenpeace Council between 1979 and 1986. Records consists of extensive correspondences, minutes of the meetings and annual reports from various committees and councils on which Mulhall served, financial reports and other records related to the fiscal management of the Stiching Greenpeace Council and the Greenpeace’s national offices, as well as newspaper clippings, annotated journal publications, and photographs, which document Greenpeace’s administrative activities as well as its various environmental campaigns.

The Jim Hamm Documentary Film Collection consists of materials relating to three of his documentary films: “The Air We Breathe” (1996), “Between the Rock and a Hard Place” (1997) and “Turning Down the Heat” (1999). “The Air We Breathe” was a co-production of Jim Hamm and the National Film Board. It is an examination of the problem of smog in relation to political decisions, dependency on automobiles, and social-cultural forces. Hamm acted as co-producer, script writer and director.

The fonds consists of newspaper clippings, correspondence, handwritten notes, news releases, reports, minutes, government brochures, and maps collected by Sawicki during her years on the Burnaby City Council and as an MLA for the riding of Burnaby-Willingdon. The majority of records relate to issues on the environment and agriculture which reflect Sawickis major interests while serving at both civic and provincial levels. At the civic level the fonds includes records from Sawickis work on several environmental and waste management committees. The fonds also includes a series on the Six Mile Ranch affair which relates not only to Sawickis role as an MLA for the New Democratic Party and her position as Parliamentary Secretary to the Minister of Environment, but also to her long-term commitment to, and participation with the Agricultural Land Commission. The fonds includes numerous reports and submissions regarding the Six Mile Ranch affair.

If you would like to consult any of these materials in person, you can visit Rare Books and Special Collections. To learn about other archival holdings related to natural resource extraction and the climate, check out RBSC’s Forest History and Archives Research Guide.