The Oxford English Dictionary, the Grimm Brothers, and Miley Cyrus

Please join us for a talk sponsored by Rare Books and Special Collections at UBC Library.

The Oxford English Dictionary, the Grimm Brothers, and Miley Cyrus
On the Changing Expectations of the OED: Past, Present and (Possible) Futures

Stefan Dollinger, assistant professor of English language at the University of British Columbia and editor-in-chief of The Dictionary of Canadianisms on Historical Principles

The Oxford English Dictionary is one of the longest-running academic projects in history. Commenced in the early Victorian period and funded by Oxford University Press since its inception, it represents a grand achievement in English letters. As such, the OED commands a lot of prestige: when completed in 1928, no less illustrious personage than the British prime minister was the guest of honour, and Oxford University bestowed honorary degrees upon its publishers. As with any large-scale project, fair criticism can be hard to come by—one may take for granted that the OED is the apex in the field. While such claims may be hard to defend today, due credit must be given to a project that has navigated any and all rough seas for over one and a half centuries.

Professor Stefan Dollinger will offer a brief social history and criticism of the OED. Contextualizing its origins, he will consider how perceptions and expectations of the OED have changed over the decades. Today, the OED is popularly considered to list all English words, from William Shakespeare to Miley Cyrus, though such comprehensiveness was never its goal. While Miley Cyrus has as yet little to contribute to word coinage, her current notoriety and media exposure creates the possibility that she may one day popularize concepts, words, and phrases that could find entry into the OED: or shouldn’t they? This potential exemplifies the colloquialization and popularization of the OED that has already commenced. Beyond the impact of individual celebrities, the major question concerning the OED today revolves around how to conceive of the dictionary in the 21st century. Now that English is spoken by (far) more second language speakers than first language speakers, will the OED adapt to the new realities?

Free and open to the public.

For more information, please contact Rare Books and Special Collections at 604 822-2521 or rare.books@ubc.ca, and visit the exhibition The Road to the OED: A History of English-Language Dictionaries from November 7-December 24, 2013. 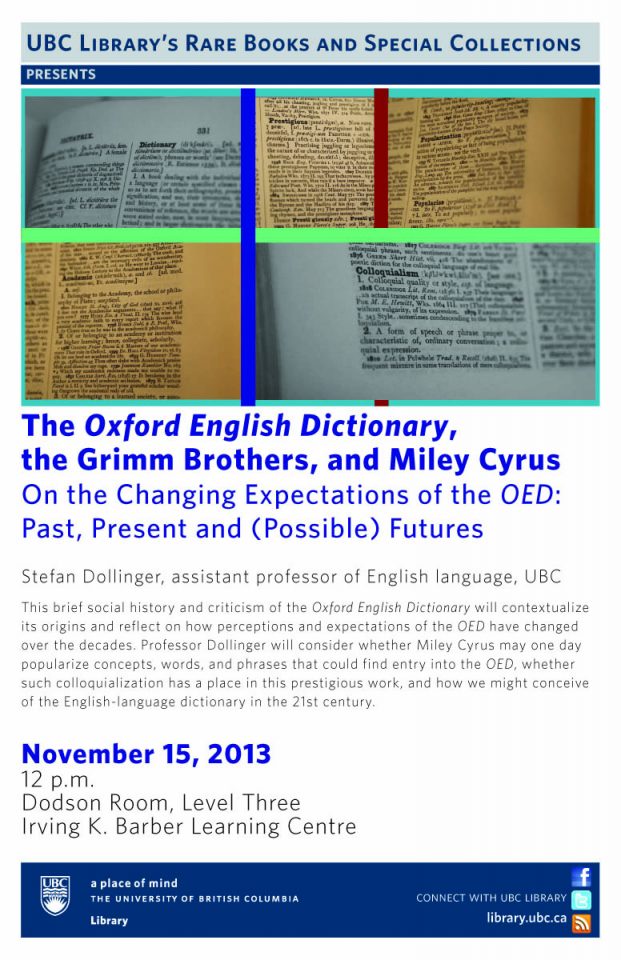 The Oxford English Dictionary, the Grimm Brothers, and Miley Cyrus