Thanks for joining us!

Many thanks to everyone who attended Professor Dollinger’s talk last Friday on the past, present, and possible future(s) of the Oxford English Dictionary. It was entertaining, insightful, and provided lots of food for thought. Even if you weren’t able to make it to the talk, the related exhibition, The Road to the OED: A History of English-Language Dictionaries, will be on display in Rare Books and Special Collections until December 24. We hope you stop by!

Now for this week’s student dictionary report from the course English 320: History of the English Language. 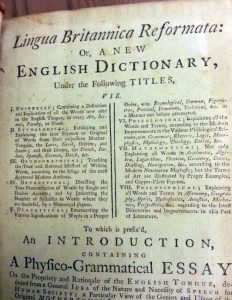 Benjamin Martin (bap. 1705, d. 1782), the author of Lingua Britannica Reformata, or, A New English Dictionary (1749), was a man known for being “remarkable for his successful versatility” (Millburn 2004). “In an age when it was still possible for one man to comprehend virtually all branches of science,” John Millburn writes in his biography of Martin, “he was the supreme non-specialist” (Millburn 1976, 2). Indeed, Martin was not only a lexicographer, but also a teacher, lecturer, eyeglass-specialist, and microscope-maker. In fact, for most of his life, his main occupation was lecturing on Newtonian physics. He began writing books with the intention of lowering the price of books, as he wanted to ensure that people could educate themselves through reading. Having been born the son of a farmer, books were his gateway to knowledge, and apparently it was through extensive reading that Martin came to understand the various subjects he later taught when he opened up a school in Sussex with his wife (Martin 2004).

Lingua Britannica Reformata is but one of his many publications, and it was published twice, once in 1749 and again in 1754 (Millburn 2004). He wrote it with several aims in mind, which are listed at the beginning of the dictionary. A particularly interesting aim was that of UNIVERSALITY. By this, Martin meant that he intended to achieve a “just Mean” between “useless and obsolete Words” and “those which are useful and necessary” (Martin 1749, iv) – in other words, fairly represent words that are commonly used in English language, regardless of their potentially lower prestige. He believed in the importance of accurately reflecting the English language of his time as it was most commonly used, and did not share the same concern for preserving antique forms and words that other lexicographers may have had. Nevertheless, he understood the importance of linguistic history, and he spent a great deal of effort on etymology in both the preface to the dictionary and in the actual entries themselves. He argued that knowing a word’s etymology was crucial for a clearer understanding of the word’s signification, and thus provided Greek, Hebrew, French, or Latin roots for words where he could, occasionally glossing the meaning of the root word. 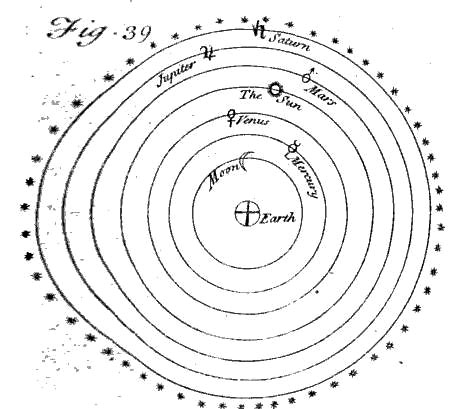 An interesting insert in the dictionary that is worth looking at is the collection of geometrical and astronomical diagrams that he included in the back of the dictionary, likely because of his own expertise in those  subjects. Martin was undoubtedly a fascinating figure of his time, and continues to be remembered for being an excellent polymath.