The OED and Miley Cyrus?!

So what does Miley have to do with the Oxford English Dictionary, you may ask? If anyone can tell us, it’s UBC’s Professor Stefan Dollinger. Professor Dollinger will be giving a talk this Friday, November 15, at 12 p.m. entitled:

The Oxford English Dictionary, the Grimm Brothers, and Miley Cyrus
On the Changing Expectations of the OED: Past, Present and (Possible) Futures

In addition to contextualizing the origins of the OED, Professor Dollinger will consider whether Miley Cyrus may one day popularize concepts, words, and phrases that could find entry into the OED, whether such colloquialization has a place in this prestigious work, and how we might conceive of the English-language dictionary in the 21st century.

The talk will be the Dodson Room on level three of the Irving K. Barber Learning Centre at UBC. Bring your lunch and join us for what promises to be a fascinating talk!

Now for this week’s student dictionary report from the course English 320: History of the English Language.

Dictionaries play an essential role in the history of English lexicography. They keep not only a record of our vocabulary, but also a record of our culture and our beliefs. An English Dictionary Explaining the Difficult Terms by Elisha Coles is a wonderful dictionary that offers contemporary readers a glance into the past and at the changes in the English language. 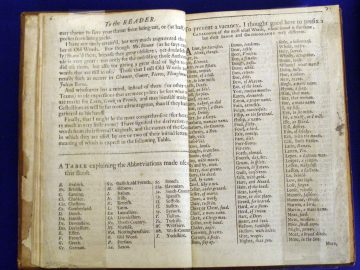 Coles was born around 1640 and died in 1680. He was a lexicographer, a stenographer, and a schoolmaster in London. He is best-known for his dictionary. There are a total of 13 editions of the dictionary published between in 1676 and 1732. Since 1732, it has been reprinted many times (the most recent reprint is in 2011). Between 1500 and 1650, there was an influx of new words borrowed into English from Latin or Greek, or distant countries that English traders had visited, leading to a growing need for English dictionaries as the English lexicon became difficult for many English-speakers. Nonetheless, the earliest monolingual dictionaries were not general-English-language dictionaries, but “hard word” dictionaries that explained difficult and foreign words. Although the title contains “difficult terms,” this was the first dictionary to shift towards becoming a general-purpose dictionary by including a broader variety of materials, such as canting terms (also called criminal slang). 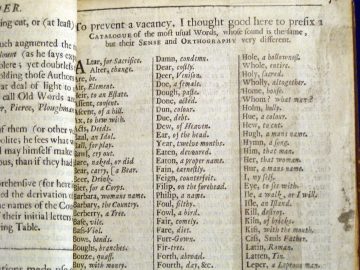 As Coles’ dictionary is one of the earliest monolingual English dictionaries, it is not surprising that it does not have many of the features that contemporary dictionaries do (e.g., part-of-speech, subject label). Nevertheless, it has many noteworthy features not found in modern dictionaries. For example, it includes a catalogue of homophones from which we can see evidence of sound change (e.g., “are,” “air,” and “heir” are listed together, suggesting that “are” may have sounded like “air”). Also, on the last page, there are seven tables of measure (e.g., a table of Troy-weight, of Aver du pois Weight), exemplifying the intensity of language-mixture and culture-mixture during the 17th century as a French table of weight is included in a monolingual English dictionary. The tables of measure are different from today’s measures as well (e.g., “13 years, 1 day and 6 hours” makes “1 year very near”). Furthermore, the dictionary illustrates a period of transition in orthography (i.e., its own content alternates between using “s” and long “s,” and –t and –ed past tense inflection). Overall, although An English Dictionary does not have many of the dictionary features found in modern dictionaries, it has its own unique features which reflect the interests and concepts of its time. Providing a glimpse into the past, it is a valuable dictionary not only for the 17th century but also for the 21st century and probably for many centuries to come.