Many thanks to guest blogger, Eva-Marie Kröller, Professor Emerita in the Department of English Language and Literatures, for contributing the below post! 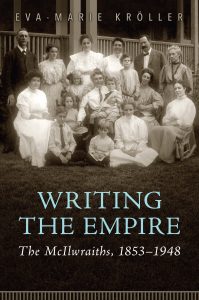 “Writing the Empire” is a collective biography of the McIlwraiths, a family of politicians, entrepreneurs, businesspeople, scientists, and scholars.

In the fall of 2014, I was in the throes of piecing together Jean N. McIlwraith’s career as writer and editor, for a book on her family now due to appear in spring 2021 as Writing the Empire: The McIlwraiths, 1853-1948 with the University of Toronto Press. I had been able to look through a bankers box full of McIlwraith’s papers held by the family, but while some brief periods in her life were thoroughly documented, there were others – and clearly important ones – about which little if anything had come to light. There was nothing, for example, on her collaboration with William McLennan on the historical novel The Span o’Life (1899) in the box, and on checking his files at my inquiry, Leslie Monkman – author of McLennan’s biography in the Dictionary of Canadian Biography – merely found a note to self with a question mark on it.

Under the circumstances, even individual letters like the one McIlwraith wrote in 1925 to Margaret Cowie, a Vancouver teacher who was collecting books and photographs for her school library, were a welcome find, but when I contacted UBC Library’s Rare Books and Special Collections (RBSC) about this letter, I was not prepared to get a sensational email about a relevant new acquisition. The newly processed McLennan family fonds included the papers of author William McLennan. Among these was a sizeable folder primarily containing letters written from McIlwraith to McLennan between 1896 and 1897 during their collaboration on The Span o’Life.

My response was an unscholarly “WOW!,” and I was in the reading room of the RBSC as soon as I could possibly get there. The correspondence turned out to be extensive and as informative as I hoped it would be. There are many things to be said about these letters, but I will concentrate on a few aspects of literary collaboration illuminated by them.

The Span o’Life, one of several fictional renditions of the Battle of the Plains of Abrahams from a Jacobite perspective, is part of a late nineteenth- and early twentieth-century North American tradition in collaborative novels. As Susanna Ashton has shown in Collaborators in Literary America, 1870-1920 (2003), these productions could either serve as a gimmick to refresh tired novelistic techniques or they could be turned into serious debates of current concerns. The ne plus ultra of collaborative novels was The Whole Family, a Novel by Twelve Authors (1908), instigated by W. D. Howells, with Henry James as the best-known participant and Mary E. Wilkins Freeman as the most daring. As she has related in her memoir Three Rousing Cheers (1938), the harassed moderator of the collective was Elizabeth Garver Jordan, then editor of Harper’s Bazaar.

The connection between McIlwraith and McLennan or the reasons for their collaboration are not clear although the families may have known each other through the Great Lakes trade, and McLennan’s wife Minnie appears to have attended the Wesleyan Ladies’ College in Hamilton where Jean and her sisters were also students. The mutual esteem between these families is evident in these letters, and members were drafted to comment on everything from Scots idiom to the length of kilts to ensure authenticity in The Span o’Life. The authors also consulted with historians in Quebec such as the Abbé Henri-Raymond Casgrain whom Jean McIlwraith may have met on her own or through her brother-in-law John Holt of the Holt-Renfrew store. The role of moderator for The Span o’Life was played by McLennan’s brother, John Stewart, executive at the Dominion Coal Company in Boston and connoisseur of the history of Louisbourg. His services were needed because Jean McIlwraith was ferocious in defending her views of female agency, offering to “roll [her partner] in the snow or drop [him] in the ice for a cold bath,” along with other uncomfortable ministrations, if he did not give in to her emancipatory views (which, with his brother’s support, he mostly did not). In making a passionate pitch for female independence even if it was unhistorical for the eighteenth-century character of Margaret Nairn, McIlwraith anticipated Mary E. Wilkins Freeman in The Whole Family, who refused to shape the character of her chapter into a faded spinster as expected and instead turned her into a sexually alluring single woman in her thirties.

Contemporary reviews of The Span o’Life underscored that this was innovative work in historical romance, made all the more appealing because it was mildly risqué. As was often the case with collaborative work, most of the critical credit went to the better-known partner, in this case McLennan, but he negotiated an advantageous financial deal with Harper’s for Jean McIlwraith and, before his early death in 1904, provided generous support when she looked for work with a New York publisher. In addition, McLennan’s well-established credentials were useful in persuading Harper’s to commission illustrations for The Span o’Life from the Austrian Felician de Myrbach, whose work had previously appeared in books by Jules Verne, Alphonse Daudet, and Victor Hugo.

One of the poems in the novel was set to music by composer Frederick F. Bullard, with the rather ambitious goal that “the world will sway to the rhythm of the music.” A trained musician, McIlwraith was particularly interested in the role of music in their book, and one of several unexpected discoveries in these letters was the identity of her real-life voice teacher in McIlwraith’s story “A Singing-Student in London.” He was the unlikely-named tenor William Shakespeare, whom she transparently renamed as “Francis Bacon.” Shakespeare’s students readily recognized him and, because their own livelihood as voice teachers depended on having taken lessons with him, her criticism was vehemently discredited in the magazines. This, as she relates to McLennan, was one of several instances in which her impetuous indiscretions landed her in very hot water.

Without the arrival at RBSC of the McLennan family fonds, I would not have known about most of this background history and my book would have been the poorer for it. This brief review of literary collaboration would therefore not be complete without drawing out, once again, the crucial cooperation between researchers and attentive archivists.